Visit ABILITY at these upcoming conferences

“Hospitals are seeking to hold post-acute-care providers accountable because they have more at risk under value-based payment models,” according to a May 9 story in Modern Healthcare.

[expand title=”Read More”]The story reports on a growing number of hospital systems moving to evaluate post-acute facilities based on a variety of measures. Examples of data required from post-acutes include infection rates, length of stay and hospital readmission rates. The hospital systems then create their own preferred networks of facilities which they present to patients who need post-acute care.

“Preferred SNF networks represent an aggressive new strategy by hospitals to gain more control over quality and costs in the largely independent skilled-nursing facility sector,” according to the Modern Healthcare story. Efforts like these are part of the move to value-based care, which is intended to reduce hospital readmission rates, lead to shorter lengths of stay in the SNFs, and otherwise improve quality of care for patients.[/expand]

Many of you have seen the recent announcements about upcoming changes in Medicare payments. In January, the Department of Health and Human Services (HHS) announced that by 2016, 30% of all Medicare provider payments should be in alternative payment models tied to how well providers care for their patients (known as “value-based” care), instead of how many procedures or services (“volume-based”) they provide. By the end of 2018, the goal rises to 50%.

[expand title=”Read More”]This isn’t news to many of you already participating in “alternative payment models,” or planning to do so soon. These models include Accountable Care Organizations (ACOs), patient-centered medical homes or bundled payment arrangements for episodes of care – all designed to make value-based care easier to provide and to measure. Two ways that ACOs, for example, are working toward this goal is through greater coordination of care (among their member doctors, hospitals and other providers) and through increased use of health information technology.

HHS has recognized the need to align payers other than Medicare with this effort, noting that “making operational changes will be attractive only if the new alternative payment models and payment reforms are broadly adopted by a critical mass of payers.” In March, HHS launched the Learning and Action Network, bringing together private payers, employers, consumers, providers, states and state Medicaid programs, and other partners to expand alternative payment models into their programs. More than 2,800 organizations have already signed on.

This spring, Congress passed the long-awaited repeal of Medicare’s Sustainable Growth Rate (SGR) formula, which was signed into law by President Obama on April 16. (See more in the “doc fix” story below.)

What does this have to do with ICD-10?

[expand title=”Read More”] The passage of the new “Merit-Based Incentive Payment System” means there should now be little chance that the ICD-10 implementation deadline will be delayed again. A year ago, uncertainty persisted because of the last-minute addition to the 2014 SGR legislation that pushed back the ICD-10 deadline to October 2015. But that kind of language was kept out of the 2015 bill.

That doesn’t mean that ICD-10 implementation will have smooth sailing. In May 2015, two bills were introduced in Congress to either stop ICD-10 or install a transition period. The AMA has expressed support for the former bill. Nevertheless, the passage of either bill into law is considered a long shot. Providers are advised to continue their path to the conversion while keeping a close eye on Congress, according to a May 20 story in Healthcare IT News. [/expand]

[expand title=”Read More”]The new legislation, signed into law by President Obama on April 16, replaces the Medicare SGR formula (and the continuing need for fixes) with automatic payment increases for physicians from 2015 through 2019. After that, there will be no automatic increases, and doctors’ rates will be based on their performance in a new system called MIPS, or Merit-Based Payment Incentive System.

The MIPS aligns with Medicare’s goals to emphasize value-based over volume-based care. The five years of automatic increases represents a time for providers to complete a transition to the new kind of care, often accomplished by participating in alternative payment models such as accountable care organizations (ACOs), medical homes, and bundled payment models.

The 2015 legislation was strongly supported by the American Health Care Association, whose President and CEO called the legislation “the first step in establishing long-term stability to the profession.” To learn more about how this legislation will affect nursing home operators, click here to view a story from McKnight’s.

Quoted in this story from Kaiser Health News, the CEO of the American Medical Association also expressed approval of the legislation, saying that its passage “finally brings an end to an era of uncertainty for Medicare beneficiaries and their physicians” and helping to implement “innovative care models that will improve care quality and lower costs.” See the Kaiser story for more, including Q&A about the new 2015 law.[/expand]

ABILITY Network has acquired System Designs, Inc (SDI), the developer of the PC-ACE Pro32TM claims processing system, a key revenue management tool for thousands of healthcare providers across the country. SDI contracts with all Medicare Administrative Contractors (MACs) in the U.S. to provide the PC-ACE software to hospitals, home health agencies and skilled nursing facilities through that network.

[expand title=”Read More”]“The PC-ACE service holds a unique role in the healthcare industry,” said Mark Briggs, CEO of ABILITY Network. “It has truly become an essential tool for many providers. We’re very pleased to bring it into the ABILITY portfolio as an excellent complement to our other high-quality software services.

“SDI’s customers will also now have access to the larger scope of ABILITY services,” Briggs continued. “This is another important step forward for ABILITY as we continue to deliver innovative services to meet an expanding range of provider needs.”[/expand] 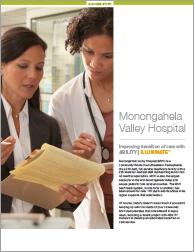 In a recent survey by ABILITY, skilled nursing facility billing managers from across the United States talked about the toughest SNF billing management challenges they face, and described the solutions they’ve come up with to address them.